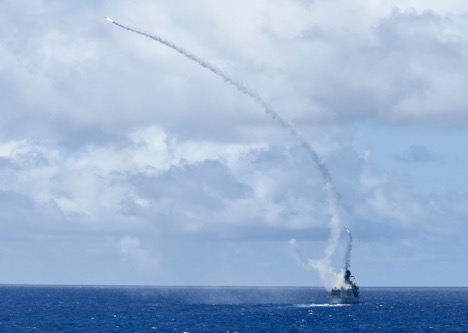 Last year, as part of the broader discussion about a Plan B for Australia’s defence strategy, I started a series looking at Australia’s options to project military power in an age in which we could no longer take American military primacy for granted.

The series considered long-range strike options built around bombers and variants of the F-35. In coming weeks, I’ll look at other options, such as long-range missiles, submarines and cyber warfare.

My consideration doesn’t include nuclear weapons. I’m hesitant to say it’s limited to ‘conventional’ options because some potential approaches could in fact be quite unconventional, like cyber. But I’ll use the term conventional to mean non-nuclear. The other point to emphasise is that the Plan B discussion is set in the context of changing power relativities between the US and China. But it’s not judging the US’s willingness to defend Australia; it’s simply acknowledging that it will likely have less capacity to do so and it’s important for us to look at what we can do to help ourselves within the alliance.

My pieces are part of a larger discussion about the purpose and viability of long-range strike options for Australia. But there are very different views on what we need a strike capability to do and—just as importantly—what we can’t expect it to do. At the nub of the argument is the question of whether Australia could ever have a large or potent enough conventional strike capability to influence the behaviour of a hostile great power.

To paraphrase the sceptics, having a strike capability is pointless, and in fact self-destructive, because any conventional strike on a major-power adversary’s homeland would inflict minimal damage and be repaid 10 times over. It’s a fair point, and one that I considered so obvious I hadn’t discussed it. I’m not saying we should get a long-range strike capability to bomb a major-power adversary’s homeland.

But then what do we want it for? Let’s take a step back and have the framing discussion I skipped over at the start of this series. It useful to begin with deterrence theory (noting that much of its history and application arises from the nuclear context).

Here’s a useful primer by the RAND Corporation’s Michael J. Mazarr on deterrence for people who are too busy to do a degree in strategic studies.

Mazarr argues that the most important thing is that deterrence ‘must be conceived primarily as an effort to shape the thinking of a potential aggressor’. That is, the effectiveness of deterrence depends on its ability to shape the perceptions of the potential adversary, and therefore is specific to their ‘interest, motives, and imperatives’. It’s very context-specific.

This leads to a second key point.

Deterrence by denial is more direct—if you seek to attack my territory, I’ll put more troops and weapons there. Deterrence by punishment involves a more indirect response so it can be harder to understand how you are, or aren’t, shaping an adversary’s calculus.

For this reason, Mazarr notes, ‘most classic studies suggest that denial strategies are inherently more reliable than punishment strategies’ (although other theorists may disagree). A potential adversary can see that I am taking direct steps to bolster the defence of my territory. But they may not be convinced that I am going to launch a nuclear strike on their homeland if it could prompt a retaliatory nuclear strike on mine.

Because deterrence is about shaping potential adversaries’ perceptions, what works against one may not work against another because the latter may be willing to pay a higher price. Similarly, what works against one may not always work because its willingness to pay a price may change as its own threat perceptions change. And crucially, deterring an adversary from one course of action can lead them to take another one which presents other threats and therefore requires other responses.

But what does this mean for an Australian long-range strike capability?

First, I don’t think we can exercise deterrence by punishment against a great power. Delivering high explosives long distances is expensive and difficult, even if technological developments mean it can be done increasingly precisely.

There would also be too many targets in the adversary’s homeland for it to be a compelling punishment.

Moreover, because the adversary has the ability to escalate, they would rightly think that Australia wouldn’t actually do it.

Australia might well be able to apply deterrence by punishment through other means, particularly when working with others, such as by threatening international opprobrium or economic sanctions.

But I’d agree with RAND Corporation’s Michael J. Mazarr that that’s not an entirely reliable strategy, especially if the norms of the rules-based global order are falling apart.

Therefore, we’re looking at a long-range strike capability to contribute to deterrence by denial.

Operationally, it would raise the difficulty for an adversary to conduct armed operations against us and in our area of strategic interest by requiring them to apply more military resources and absorb greater losses.

The capability needs to be long range for two reasons.

The second is that if we can threaten the adversary’s forces 3,000 or 4,000 kilometres away, it greatly complicates their operations and raises the difficulty and cost for them to project force against us.

So, how much of a strike capability does Australia need, and could we ever afford it?

That depends on the motivation of the adversary. While they may be very powerful, if they don’t have an extremely strong motivation to use armed force against us, then a strike capability that we can reasonably afford could well be sufficient. This does of course raise the question of why anyone would ever bother to use military force against us if they didn’t have strong motivation—but it’s difficult to predict all potential adversaries’ motivations for all time.

But the greater the adversary’s motivation is, the more of a deterrent capability we need to have.

I’m hesitant to start talking actual scenarios, but here’s one.

One of Australia’s long-term strategic priorities has been to prevent a potentially hostile power from deploying forces to the southwest Pacific that could either cut us off from the United States or project force directly against us. Currently, due to the range limitations of Australian airpower, there’s little we could do to deter them, other than by using submarines, which have their own shortcomings.

This is a significant vulnerability, since east coast Australian cities, military assets and critical infrastructure are well within the range of missiles that could be based in the southwest Pacific. An Australian long-range strike could target ships, aircraft and facilities there as well as the logistics chains supporting them, potentially much of the way back to the adversary’s home bases, greatly reducing the enemy’s safe ‘rear area’.

Granted, a state like China is skilled in conducting grey-zone operations and would be unlikely to simply seize a Pacific state.

Instead, it would use inducements to secure host government agreement. That would of course raise the bar for our own use of force—it’s one thing to support a neighbouring state that’s being invaded, but it’s another to strike it for agreeing to host a third state’s forces. But that ultimately is why we are embarking on the Pacific step-up—to ensure we remain the region’s security partner of choice. A military deterrent is just one of many tools necessary to maintain regional security.

As with all deterrents, an effective long-range strike capability doesn’t close off all avenues for a potential adversary to seek to harm us. For example, if the cost of direct military action becomes too high, they may seek to coerce us in ways targeted at our fears, such as by destabilising neighbouring countries and thereby causing a spike in refugee flows.

So a long-range strike capability is not a silver bullet that defeats all potential threats for all time.

But it could deter an adversary from undertaking what is generally considered to be the course of action with the most severe consequences for us, namely military action against Australia and our near neighbours.

This article was originally published by ASPI in two parts:

Deterrence and a long-range strike capability for Australia (part 1)

Deterrence and a long-range strike capability for Australia (part 2)