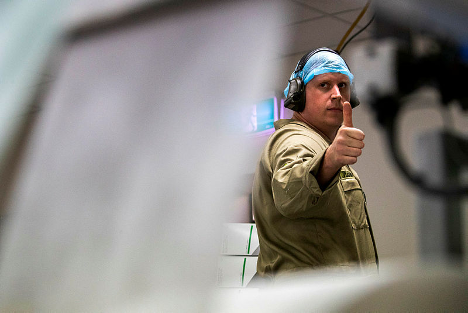 In the viral outbreak of prognosticating about what the future beyond coronavirus should look like, there’s virtual unanimity about the need for countries to have supplies of essential items at the ready for crises.

To be sure, US tech companies had already begun to ‘decouple’ their supply chains from China, but the global shortages of medical supplies, from face masks to ventilators, has amplified concerns about continuing with business as usual.

Whether out of concern that China could exploit its status as a virtual monopoly supplier, or concern that the just-in-time supply chains that are a feature of modern globalised trade can’t cope with surge demand in crises, there are widespread calls to diversify suppliers and, if necessary, bring manufacturing back onshore.

The latter won’t necessarily be easy.

The recent history of the Australian defence industry illustrates the challenges of trying to ‘onshore’ essential manufacturing when dealing with relatively small quantities in extremely competitive global markets.

The government released its defence industry policy statement in early 2016 as part of the defence white paper. Its goal was to improve the delivery of defence capability, particularly in high-priority areas where ensuring supply and thereby sovereign capability are essential.

Since then, the policy has been driven by a broad range of measures, including a willingness to pay more for local manufacture to increase Australian industry capability and content.

Yet while there have been individual success stories, particularly in advanced technology, at the macro level there has been virtually no increase in the ratio of defence acquisition dollars spent locally to those going overseas.

There are reasons for this. Modern military equipment is extremely complex and therefore difficult and expensive to develop. Australia doesn’t have the ability to design and build military aircraft, for example, so they must be bought overseas.

But even equipment built here still relies on high-value, imported subsystems. For example, at least four of the five major subsystems for the future submarine will be provided by overseas suppliers. It’s likely to be a similar situation in other sectors such as complex medical equipment, although Australia could build on a rich history of innovation in medical technology.

That reliance on supply chains can cause disruption.

Despite being designed and built in Australia, the Hawkei protected vehicle recently endured nearly a year’s production delay when its Austrian engine supplier went into insolvency. This is the kind of risk that the US’s efforts to decouple from China are trying address, but it will be harder for an economy the size of Australia’s with a much smaller industrial base.

Moreover, even if we can manufacture to meet normal demand there’s an additional cost in maintaining idle surge capacity.

The Australian National Audit Office reported that from 1999 to 2015, the Department of Defence paid $526 million for munitions produced by facilities in Mulwala and Benalla, but it spent a further $1.9 billion building, operating and maintaining the facilities to keep the industrial capability ready for possible war.

A key lesson from defence industry is we can’t do everything.

But deciding what to prioritise and how to work with industry to ensure local supply is difficult.

It took two years after the initial defence industry policy statement for the department to identify 10 priority areas for defence industry, and another two years later it has released detailed implementation plans for only two of those areas.

Defence is likely not the only government department that will need to rebuild its ability to conduct industrial planning.

In some ways, the challenges in defence industry are simpler than in the broader economy. In the defence sector a monopsony-monopoly (or near monopoly) relationship rules, in which a single customer works with a very small number of suppliers. As a single customer, the government can decide what it’s willing to pay a premium for to ensure its priority capabilities are delivered.

That model may map reasonably neatly onto the healthcare sector for high-value equipment, such as ventilators, if the government is able to decree that all hospitals must source them locally from identified suppliers.

But it’s unlikely to work for items with a broader market.

How long will Australians be willing to buy Australian-made face masks if they can get them for a fraction of the price from overseas manufacturers?

While Australians may expect their government to buy locally, they generally apply other value criteria than just ‘made in Australia’ when it comes to their own money.

So it’s possible that local manufacturers of face masks, hand sanitiser and surgical gloves that are set up in the immediate wake of the Covid-19 crisis will follow the trajectory of the Australian car industry.

Of course, domestic manufacture isn’t the only way to address the problem, but other solutions are not sure fixes either.

Diversifying supply may mitigate the risk of a monopoly supplier abusing its power, but it doesn’t address the issue of lean, just-in-time supply chains; manufacturers in India or Southeast Asia have no more incentive to keep huge stocks ready for a future rainy day than Chinese ones do.

Onshore stockpiling will require a change in mindset.

Australian governments generally dislike paying for large stocks of essential supplies that sit idle, even if they are important to national security.

For example, due to the high cost of modern guided munitions, Defence’s stocks are unlikely to last for more than a few days of conventional warfighting.

And despite repeated warnings of the parlous state of our fuel reserves that sit well below the International Energy Agency’s benchmarks, the government has shown little appetite to invest in infrastructure to store increased onshore reserves, preferring to sign a dealwith Washington giving access to US reserves.

Whether such arrangements will be robust enough in future crises remains to be seen—in the current crisis, with its own states fighting for access to national reserves, the US hasn’t been able to provide other countries with medical supplies.

The fourth industrial revolution offers hope for small but technologically advanced nations such as Australia.

But the example of defence industry shows that if Australia wants more resilient supply chains that can be guaranteed to provide essential items when the next crisis hits, it will take planning, prioritisation and an ongoing willingness from governments, the private sector and the public to endure higher costs.

That will be a significant departure from our current business-as-usual model and require a commitment that must endure well beyond the shock of the current crisis.