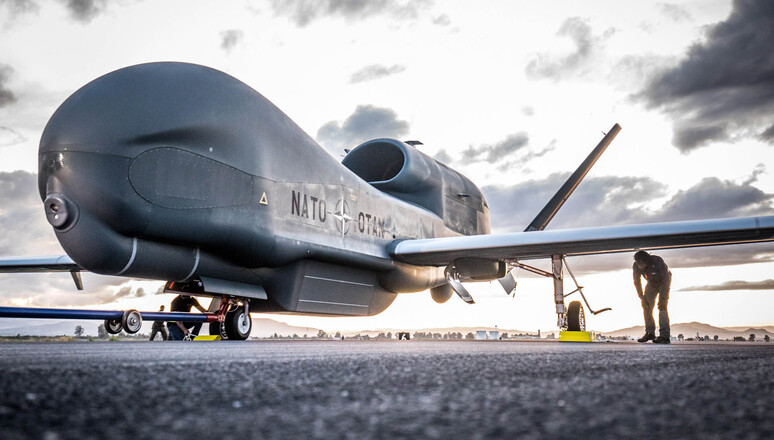 One aspect of the run up to Ukraine crisis 2022 has been virtually ignored.

Unlike earlier NATO crises, in this one European NATO states have access to their own overhead intelligence means of high quality.

The NATO Alliance Ground Surveillance system was IOCd on February 15, 2021.

“NATO is acquiring the Alliance Ground Surveillance (AGS) system, which will give commanders a comprehensive picture of the situation on the ground. A group of 15 Allies is procuring the AGS system comprised of five NATO RQ-4D Phoenix remotely piloted aircraft and the associated European-sourced ground command and control stations.

“NATO will then operate and maintain them on behalf of all NATO Allies. The AGS NATO RQ-4D aircraft is based on the US Air Force Block 40 Global Hawk. It has been uniquely adapted to NATO requirements to provide a state-of-the-art Intelligence, Surveillance and Reconnaissance (ISR) capability to NATO.”

And another NATO piece highlights who is getting access to this high-grade intelligence,

“The AGS system is being acquired by 15 Allies (Bulgaria, Czech Republic, Denmark, Estonia, Germany, Italy, Latvia, Lithuania, Luxembourg, Norway, Poland, Romania, Slovakia, Slovenia and the United States), and will be made available to the Alliance in the 2017-2018 timeframe.

“The NATO-owned and operated AGS core capability will enable the Alliance to perform persistent surveillance over wide areas from high-altitude long-endurance (HALE) aircraft, operating at considerable stand-off distances and in any weather or light condition.

“Using advanced radar sensors, these systems will continuously detect and track moving objects throughout observed areas and will provide radar imagery of areas of interest and stationary objects.

“The main operating base for AGS will be located at Sigonella Air Base in Italy, which will serve as a NATO Joint Intelligence, Surveillance & Reconnaissance (JISR) deployment base and data exploitation centre.”

What this means is that past U.S. political behavior with regard to using intelligence dominance to lead the Alliance is clearly outdated and working relationships among the European partners provide a solid basis for shaping their own judgements with regard to crisis situations, as has been demonstrated in the current Ukraine crisis.

I had a chance to discuss with my colleague, Brian Morra, a former intelligence officer and senior executive in the defense and aerospace business how this new phase in intelligence and decision making is or might play out as managing the direct defense of European defense is changing.

Morra started by highlighting the change.

“I think your premise is absolutely spot on. It’s a dramatic change from decades past in terms of the sophistication of systems available to our European allies. The ones you mentioned, of course, are of critical importance. AGS for its ability to collect operational-level intelligence without having to rely on satellite collection. AGS provides much greater loiter time over an area – like the Donbas – as compared with typical imagery satellites.

“In addition, there is good commercial imagery available that European countries can acquire independently of the United States government.  A company like MAXAR, for example, can provide allies with an overwatch that was unavailable in decades past, and it can help them shape their own decision making, either in concert with, or independent of the United States.”

It is clearly a different period now for the new NATO as the former Warsaw Pact members who are now in NATO are directly facing the Russian threat. They have significant domain knowledge from dealing with the Russians from the inside of the Warsaw Pact and will leverage the new technical means to weave it into their own narratives and are not likely to accept U.S. notions which have been shaped by long periods in the desert.

Morra highlighted that “at the recent Munich security conference we saw European statements which clearly reflected different judgements from the Biden Administration about how to interpret Putin and Russian behavior. Allies also expressed frustration with certain American judgments since they were not privy to the source material.  The hardest task of intelligence is to make judgements about intentionality and the future actions of the adversary.  Unfortunately, due to major American intelligence failures in Iraq and Afghanistan, our allies less inclined to believe our assessments at face value.  That’s what we heard at Munich.”

Different perspectives within Europe and between Europe and the United States are to be expected to become the norm.

Or put another way, U.S. intelligence dominance is no longer what it was, and certainly, not what it was in terms of shaping coordinated Alliance decisions.

But it is not evident that U.S. behavior has really changed with regard to how intelligence is communicated to and used by leadership.

And even with the massive intelligence failure in Afghanistan, President Biden is playing the classic U.S. intelligence card to shape what the United States would like to see as the common position for the Alliance.

Morra highlighted that “I don’t see evidence of a change in behavior on the U.S. side and the frustration voice by allies at Munich seems to support that conclusion. This may be, in part, a result of a devaluation of HUMINT compared to the technical intelligence disciplines – I’m not sure.

“I know that during my time as an intelligence officer and as a senior aerospace defense executive who traveled the globe, I understood the value and limitations of HUMINT.  Traveling and meeting with senior allied leaders as I did, I always learned a great deal through personal interaction and active listening.  I always learned a great deal about Russian capability and potential actions from visits to front-line NATO states like Poland and Norway.

“And there’s nothing better than sitting down with the officials of the former Warsaw Pact countries to take advantage of their deep understanding of the Russians.  I also think there has been a general decline in expertise within the U.S. military and intelligence community about Eastern Europe and its concerns vis-à-vis Russia. This is an understandable result of the focus on the Middle East and Southwest Asia since the end of the Cold War.

“It’s a different time now, and I hope there are forums in which Americans can share intelligence judgements with our NATO allies where the United States and the non-frontline European countries can listen and learn from our Eastern European allies, and not dictate intelligence judgments, particularly when dealing with an adversary as wily as Putin.”