The European Defence Agency (EDA) has been collecting defence data on an annual basis since 2006, in line with the Agency’s Ministerial Steering Board Decision of November 2005. The Ministries of Defence of the Agency’s 26 Member States (MS) provide the data. EDA acts as the custodian of the data and publishes the aggregated figures in its “Defence data” booklets and on its website1 .

The 2005 data has been collected during the pilot exercise, which included only a limited number of indicators. Complete datasets are available since 2006, based on the revised list of indicators, including the four collective benchmarks for investment, approved by the Agency’s Ministerial Steering Board in November 2007. EDA compiled the 2021 defence data figures through the 2022 PESCO National Implementation Plans, the 2021/2022 Coordinated Annual Review on Defence (CARD) Information, and individual updates by Member States.

All data is collated (“total incorporates 26 EDA Member States”), and it has been rounded. Defence expenditure figures are provided in constant 2021 prices, in order to take inflation into account and allow for a comparison across years,,

In 2021, total defence expenditure of the 26 EDA Member States amounted to €214 billion, marking the seventh year of consecutive growth. A record level of 24%, or €52 billion, was allocated to defence investments. There is overall a strong prioritisation of off-the-shelf equipment procurement in most MS while less resources are dedicated to defence research and development. This could be further reinforced by the current security context. Moreover, even though spending for research and technology reached an all-time high, with expenditure totalling €3.6 billion and bringing MS closer to the 2% benchmark, the new record level of spending is largely driven by two Member States. Finally, collaborative European defence spending remains below the benchmarks despite an increase in spending on European collaborative defence equipment procurement and R&T projects. To avoid further fragmentation of the EU defence landscape and foster coherence, Member States need to use the announced budget increases efficiently and coordinate their defence plans through joint European defence R&D and acquisition programmes. 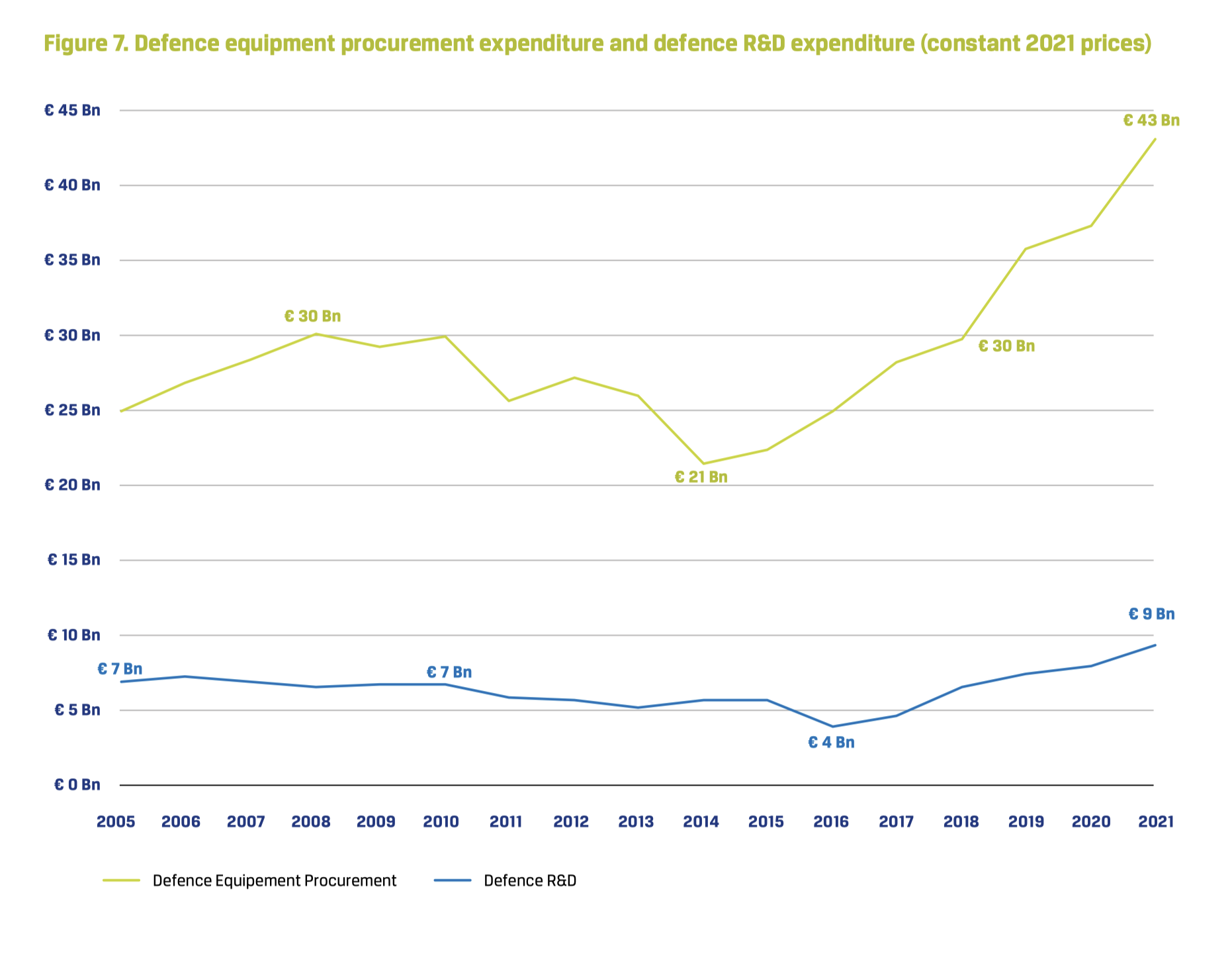 The continued increases in defence expenditure and defence investment are a positive signal and provide MS with the opportunity to close long-standing capability gaps. At the same time, MS need to use the announced budget increases efficiently and coordinate their defence plans through joint European defence R&D and acquisition programmes if a further fragmentation of the EU defence landscape is to be avoided and coherence fostered. Moreover, while current capability gaps need to be filled swiftly to replenish stocks and improve combat readiness, an adequate share should be devoted to joint defence R&T projects which are necessary to prepare for the future of the EU defence landscape and to strengthen the EU’s strategic autonomy.

Josep Borrell Fontelles, the European Union’s High Representative of the Union for Foreign Affairs and Security Policy commented at the time of the report’s release: “The war in Ukraine has been a brutal wake-up call for many of us. For years we have been under-investing, and this has meant that our stockpiles have been quickly depleted due to the fact that we are providing them to Ukraine. When we provide military support to Ukraine, this military support doesn’t come from the factory, (it) comes from the stocks, the army stocks. And everybody agrees that this stockpile has been quickly depleted because they were almost empty.”

According to Alice Tidey in an article published on 8 December 2022: “Spending on defence research and technology meanwhile increased by 41% year on year to €3.6 billion while expenditure on research and development reached €9 billion in 2021, up by almost 20% compared to 2020. Collaborative defence equipment procurement, however, was significantly below target.

“EU countries spent a total of 18% of their overall defence expenditures on joint purchases when the benchmark has been set at 35%. “We need to address the short-term needs by investing and procuring jointly, buying more together,” Borrell said.

“There are very much concrete intentions by some member states to participate in the joint procurements. But these intentions have to be translated quickly into acquisition orders sooner rather than later.”

But according to an article by Elisabeth Gosselin-Malo published on 17 November 2022:

“As EU countries tend to extensively implement their defense plans at the national level, only 18 percent of all investment in security programs were conducted in cooperation, a decrease of 1 percent from 2020. In addition, no improved coherence of the EU defense landscape has been visible.

“The key factors identified as impacting nations’ decision making were primarily nationally defined requirements, followed by achieving NATO targets, and finally EU priorities. Many were said to consider European cooperation approaches as more difficult and time consuming, which ultimately results in them opting for national solutions or non-EU solutions.”