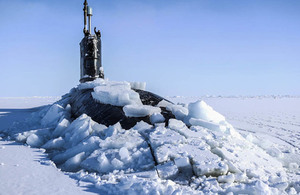 We have written over the past decade a number of articles and assessments of the changing dynamics affecting Arctic strategy and defense.

It has been a decade where the Russians have clearly focused much more attention than have Canada, the United States or NATO.

That is in the process of changing, although putting capabilities in place that can actually protect the interests of the liberal democracies is a work in progress.

Recently, the UK government announced the formulation of a new Arctic strategy for the United Kingdom.

In an article published on the UK MoD website on September 30, 2018, Defence Secretary Gavin Williamson announced a new Defence Arctic Strategy, acknowledging the increasing opportunities and threats the region presents.

The strategy will enhance the Ministry of Defence’s focus on the Arctic, underlined by our current commitments in the region and future deployments.

The new Defence Arctic Strategy will put the Arctic and the High North central to the security of the United Kingdom.

Currently, the Royal Marines conduct cold weather training in Norway on an annual basis, with around 800 due to deploy in 2019. As part of the new Arctic strategy, the Marines training will become joint with Norway on a long-term basis and integrated into Norway’s defence plan, providing UK troops a unique opportunity to train alongside a key ally.

The strategy will also complement our NATO commitments and in 2019, four RAF Typhoons will for the first time patrol Icelandic skies. This will allow the UK to work closely with allies to deter aerial threats to Euro Atlantic security. The mission will also provide the RAF with unique opportunities to test its skills in different environments.

In 2020 we will also increase our operational commitments in the area with the introduction of new P-8 Poseidon aircraft. Based out of RAF Lossiemouth, the sub-hunters will help combat a range of intensifying threats, not least increasing submarine activity in the Arctic.

This increased submarine activity poses a new threat and is something the Royal Navy is ready to combat. In 2018, a Royal Navy submarine took part in ICEX with the US Navy for the first time in ten years and as part of the new Defence Arctic Strategy, the Navy will mount regular under-ice deployments in the years to come.

The Foreign and Commonwealth Office issued an overall Arctic strategy document earlier this year and can be found here:


In an article by AV RAGNHILD GRØNNING published after the release of the FCO document, the UK policy was characterized as part of the global Britain approach.

Although UK’s new Arctic policy framework supports the status quo, the strategy is more explicit when it comes to connecting Arctic interests to its broader foreign policy interests, as a part of ‘Global Britain’.

The Foreign and Commonwealth Office of the UK published a new policy document towards the Arctic in the beginning of April this year, updating the UK’s Arctic policy from 2013.

The document reiterates the three concepts of respect, co-operation and appropriate leadership, but is less conservative than the previous policy document when it comes to its role and interests in the region.

Duncan Depledge, Director of the All-Party Parliamentary Group for Polar Regions Secretariat in Westminster and Special Adviser to the UK House of Commons Defence Committee, explains that there is little that surprises in the new Arctic policy framework.

– It is a conservative document that supports the status quo. The UK is still trying to position itself as a model Arctic neighbour that respects the rights and interests of Arctic peoples and states, shows leadership in areas such a science, and acts in partnership with other Arctic stakeholders, says Depledge to High North News.

The Arctic as an example of ‘Global Britain’

When the UK published its first Arctic policy framework in 2013 it was careful not to overstate its interests in the region. Although the UK has been a permanent observer to the Arctic Council since it was founded in 1996, it does not want to provoke other Arctic states by being too assertive in the region.

However, since the previous UK Arctic policy document was published, several other non-Arctic nations have shown more explicit interest in the region by publishing strategies and policy papers.

For example, China issued its first Arctic policy in January this year. Similarly, Japan, South Korea and the EU have issued Arctic strategy documents over the last few years.

– What stands out for me in the new Arctic policy framework is that the UK Government is more explicit about connecting its Arctic interests to its broader foreign policy interests and portraying its strengths in the Arctic as an exemplar of ‘Global Britain’ in action, says Depledge.

This aspiration is reflected in the foreword of the policy document, where Sir Alan Duncan, Minister of State for the Polar Regions states that ‘UK’s role in the Arctic reflects the very best of what Global Britain has to offer, from world-leading science, and business investment, to our commitment to environmental protection, international cooperation, and the rule-based system’.

‘Global Britain’ has become a common slogan used by politicians to describe the UK’s new foreign policy, reassuring that the UK will remain an active player on the global arena post-Brexit.

The UK is one of the Arctic’s closest neighbours and has a long history of engagement in the region, especially in the field of polar science and innovation.The policy document states that ‘UK science and innovation helps advance global understandings of how changes in the Arctic have global consequences and helps to find new solutions to the challenges’.

For example, the UK has maintained a research station at Ny-Ålesund on Svalbard since 1972, and is a part of multiple forums and agreements for science and research collaboration with other Arctic nations.

– The Government clearly wants UK-led science and innovation to lead the way in advancing global understanding of how changes in the Arctic have global consequences, and I think it is in that drive to produce knowledge that has global reach where government officials see the most opportunity to influence the rest of the international community, explains Depledge.

The uncertainties of Brexit

The policy document states that the biggest change to the UK’s Arctic position since 2013 is the decision to leave the European Union. It is however uncertain how Brexit will affect the UK’s policy in the Arctic as its final agreement with the EU is not ready yet.

Meanwhile, Depledge explains the UK has always had its own independent relationship with the Arctic, rooted in bilateral and multilateral science and defence partnerships that have developed independently of the EU. He underlines that one area where the UK might lose out is in the fisheries negotiations for the Central Arctic Ocean.

– It seems unlikely that the UK will secure an independent seat at the Central Arctic Ocean fisheries negotiations, says Depledge.
There is also a chance that science cooperation might be affected by Brexit, adds Depledge:

– The biggest risk for the UK at the moment is that British-based scientists will be excluded from future EU-Arctic science programmes. I’m cautiously optimistic that the two sides will find new ways of working together on Arctic science.