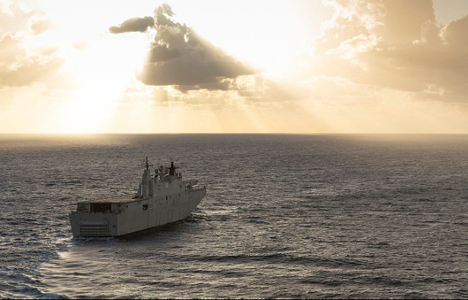 Since the announcement last week by Prime Minister Scott Morrison of a radical shift in Australia’s defence policy, the question arises whether this marks a return to the defence of Australia doctrine that became official policy in the late 1980s.

Our new defence policy proposes a decisive refocus on our own immediate region and a move away from distant operations in the Middle East, which have preoccupied us for the last 20 years.

However, while there are certainly interesting historical parallels to be drawn, they are separated by more than 30 years and there are huge differences in the low-level threat situation in which we found ourselves in the 1980s and today’s worrying strategic dangers.

There is, however, an important parallel in one respect, and that is—contrary to the views of some former prime ministers and defence ministers—a country’s geography must be of abiding concern when it comes to devising a defence policy.

As Arthur Tange said, the most important single document in defence planning is a map of one’s own country.

It was Tange’s 1972 defence review that included a map of the hemisphere with Australia at the centre. And it was the 1987 white paper that, for the first time, gave priority in Australian defence planning to the defence of the continent.

In the intervening years, and especially after September 2001, Afghanistan and the Middle East came to dominate our planning and military operations such that former defence minister Robert Hill dismissed what he called ‘the concentric circles’ of defence planning centred on Australia’s northern approaches.

Last week, Morrison noted that the 2016 defence white paper gave an equal weighting to Australia and its northern approaches, Southeast Asia and the South Pacific, and operations in support of the rules-based global order.

He now emphasises that his government has directed Defence to prioritise the Australian Defence Force’s geographical focus on our immediate region, which he said is the area ranging from the northeast Indian Ocean through maritime and mainland Southeast Asia to Papua New Guinea and the southwest Pacific.

That is precisely the area described in the 1986 Review of Australia’s defence capabilities as Australia’s area of primary strategic interest, encompassing Southeast Asia and the South Pacific.

So, at least in terms of strategic geography and force structure priorities Australia is now returning home to the defence of Australia.

Morrison made it clear that we cannot allow consideration of contingencies outside of our immediate region to drive the ADF’s force structure to the detriment of ensuring that we have credible capability to respond to any challenge in our immediate region.

This is an epochal move and reflects just how potentially dangerous our strategic situation has become.

The prime minister said we have not seen the conflation of global, economic and strategic uncertainty now being experienced in Australia and in our region since the existential threat we faced when the global and regional order collapsed in the 1930s and 1940s.

He observed that in this new and less benign strategic environment, the risk of miscalculation and even conflict is heightening and we must be alert to the full range of threats, including ones in which Australia’s sovereignty and security may be tested directly.

The other relevant comparison to make relates to the strategic policy concept that determines Australia’s defence policy and force structure priorities.

In his speech, Morrison defined three strategic objectives to guide our defence planning, including force structure, force generation, international engagement and operations. They are to shape Australia’s strategic environment, deter actions against Australia’s interest, and respond with credible force where required.

These new policies must be able to hold potential adversaries, their forces and their critical infrastructure at risk from a distance and thereby influence the calculus of costs involved in threatening Australia’s interests.

This includes developing capabilities in areas such as long-range strike weapons, cyber capabilities and area-denial systems. It will involve growing the ADF’s self-reliance for delivering deterrent effects.

In the 1986 review, a policy was recommended called ‘a strategy of denial’. The proposal involved a layered defence with forces capable of denying the sea and air gap to our north to any adversary.

Our geography would impose long lines of communication on such an adversary and make them more vulnerable.

It needs to be understood that all this was occurring more than 30 years ago in an essentially benign strategic environment.

Australia’s area of primary strategic concern—Southeast Asia and the southwest Pacific—was seen by the review as ‘one of the most stable regions in the world’. As a result, the review recommended that priority be given to more credible low-level conflict contingencies because more substantial conventional military action against us could only occur were regional countries to develop over time the necessary capacity. That would take many years.

All this is in stark contrast to today’s much more dangerous and unpredictable strategic environment.

Australia’s security environment is described in the 2020 defence strategic update as being markedly different from the relatively more benign one of even four years ago, with greater potential for military miscalculation.

This could conceivably include state-on-state conflict that could engage the ADF where Australia’s interests are threatened. Accordingly, Defence must be better prepared for the prospect of high-intensity conflict.

There is obviously a huge difference between preparing for low-level conflict in 1986—when the only power capable of doing us some harm was Indonesia—to the situation now where we need to prepare for the prospect of high-intensity conflict with possibly a major regional military power.

In an ASPI publication titled Australia’s management of strategic risk in the new era, almost three years ago, Richard Brabin-Smith and I recommended that ‘Much more thought needs to be given to planning for the expansion of the ADF and its capacity to engage in high-intensity conflict in our own defence—in a way that we haven’t previously had to consider.’

Therefore, while Australia has certainly returned to embracing the geography of our immediate region as a priority determinant of force structure in the defence of Australia, the formidable strategic uncertainty we now face results in the requirement for an incomparably stronger and much more offensive ADF.

It must be capable of denying any adversary from using military force—either directly or indirectly—against us.

Paul Dibb is emeritus professor of strategic studies at the Australian National University. He was responsible for the 1986 Review of Australia’s defence capabilitiesand was the principal author of the 1987 defence white paper, The defence of Australia.