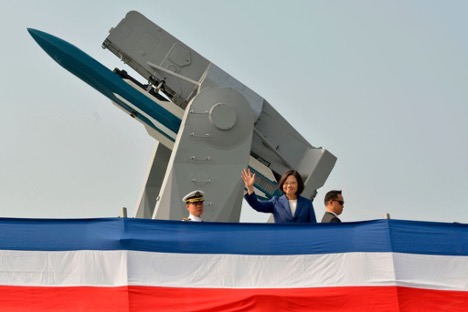 Debates about Taiwan policy often end in a moral impasse.

Those focused on preserving peace in our time often point to the devastating human costsof defending Taiwan if that ultimately means high-intensity warfare between China and Taiwan, backed by the United States and its allies in the Western Pacific.

Meanwhile, those focused on defending liberal democracy often emphasise that it would be an abandonment of core values to not protect the rights and freedoms of 24 million Taiwanese from a clear and present danger.

Although the world may eventually face the invidious choice of large-scale war or monumental moral compromise over Taiwan, it is far too soon to resign ourselves to such a grim decision.

Instead, liberal democracies can still protect Taiwan with a policy of calibrated deterrence. And Australia has a role to play in incrementally ratcheting up deterrence measures to keep pace with China’s intensifying economic, military and political pressure on Taiwan.

Although the task of deterring Beijing is becoming harder as China’s power grows, the policy options have not been exhausted.

There’s much that even medium powers like Australia can do to expand their ties with Taiwan and thereby sow further doubt in the minds of Beijing’s policy planners about the international implications of attempting to seize Taiwan.

As others have argued, Australia and other liberal democracies should continue to make the case for Taiwan’s representation in international bodies as well as its inclusion in free trade agreements.

But beyond these diplomatic and economic policy options, there are at least three concrete steps that Australia could take to increase the deterrent effect in the defence and national security spheres.

First, Canberra could establish a de facto defence attaché office in Taipei, which as part of the Australian Office would represent Australian interests in the absence of formal diplomatic relations.

As well as deepening unofficial ties with the Taiwanese Armed Forces and government, this de facto defence attaché office could potentially also serve as a conduit for intelligence-sharing between Taiwan and Australia. As the risk of conflict in the Taiwan Strait increases, this intelligence exchange function could prove immensely useful for Australia’s situational awareness.

This de facto office would meet a Taiwanese desire for such connections, while equally reflecting the extent to which the security situation in Taiwan affects Australia’s core defence and security interests. To avoid overly antagonising Beijing, it could be staffed by non-uniformed Australian Defence Force personnel and Department of Defence civilians.

As well as providing training and representational opportunities for Taiwanese forces, such activities would provide a low-profile way of building unofficial ties between the Taiwanese Armed Forces, the ADF and other regional militaries.

Although China would view such activities with suspicion, the focus on relatively uncontentious activities and the precedent of Singapore’s low-key military relationshipwith Taiwan would likely moderate blowback from Beijing.

Third and finally, Australian politicians at the federal and state levels could establish a Taiwan–Australia parliamentary exchange.

Such an exchange wouldn’t need to be endorsed by the federal government and could be pursued independently by likeminded senators and members of parliament.

It could facilitate productive and candid exchanges on shared national security concerns for both Taiwan and Australia, including managing the impact of China’s politically motivated trade restrictions and responding to Beijing’s political interference.

As well as assisting Taipei and Canberra develop concrete policy responses to Beijing’s statecraft, such an exchange program would allow Australian legislators to gain an intimate understanding of the threat China poses to Taiwan’s freedoms.

Although China would disapprove, such an initiative would be consistent with the policies adopted by other liberal democracies such as France, which recently rejected Beijing’s efforts to dissuade French legislators from official contact with Taiwanese authorities.

Of course, these policy initiatives alone won’t be enough to deter China from, in extremis, invading. But they are precisely the kind of calibrated ratcheting up of international engagement with Taiwan that will challenge Beijing’s efforts to isolate Taipei.

It would be imprudent to not ask how these initiatives would impact Australia’s ties with China.

The simple answer is negatively. China would most likely cast these moves as destabilising meddling in its internal affairs and issue firm public and private diplomatic rebukes.

Yet the relatively discreet nature of these initiatives and the precedents from other countries suggest that they will probably not cause a further dramatic downturn in the already strained Australia–China relationship.

And even if these initiatives breed additional ill-will in Beijing, they are still likely the right course of action for Canberra.

For designing Taiwan policy for Australia is not just a question of strategy; it is also a question of ethics. Our decisions on Taiwan may define for this age the values that we represent and our willingness to uphold them.

Benjamin Herscovitch is a research fellow in the School of Regulation and Global Governance at the Australian National University.