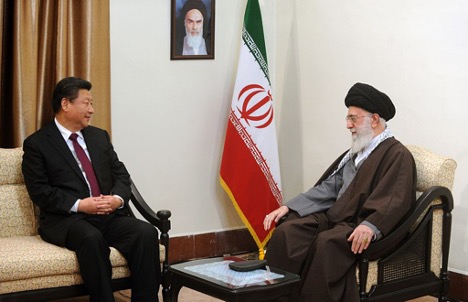 The signing of a 25-year cooperation agreement between the oil-rich and regionally influential, but US sanctioned, Islamic Republic of Iran and the globally powerful, but US pressured, People’s Republic of China inserts a new strategic pincer in the Middle East for the United States and its allies. Former US President Donald Trump must bear most of the responsibility for this development, which President Joe Biden now has to handle.

The agreement is the culmination of growing economic, trade and military ties between the two countries since the advent of the Iranian Islamic regime following the revolutionary overthrow of the Shah’s pro-Western monarchy 41 years ago. Although the contents of the deal haven’t been fully disclosed, it will certainly involve massive Chinese investment in Iran’s infrastructural, industrial, economic and petrochemical sectors. It will also strengthen military, intelligence and counterterrorism cooperation, and links Iran substantially to China’s Belt and Road Initiative as an instrument of global influence.

China–Iran trade amounted to some US$31 billion in 2016 following the conclusion of the landmark multilateral Iran nuclear agreement known as the Joint Comprehensive Plan of Action, or JCPOA. However, it declined after Trump withdrew from the deal in May 2018 despite opposition from the other signatories (Britain, France, Germany, Russia and China) and imposed harsh sanctions on Iran. The trade volume is now nonetheless set to reach new heights. Underpinning this exponential elevation of relations is the two sides’ mutual interest in countering the US and its allies.

Deeper and wider cooperation between China and Iran, especially when considered in the context of their close ties with Russia and the trio’s adversarial relations with the US, carries a strong potential for changing the regional strategic landscape. So far, China has been careful not to partner with Iran to an extent that could jeopardise its lucrative relations with the oil-rich Kingdom of Saudi Arabia (Iran’s regional archrival) and its Arab allies. In 2019, China imported some 17% of its oil needs from Saudi Arabia alone, not to mention 10% from Iraq, smaller amounts from Kuwait, the United Arab Emirates and Oman, and only 3% from US-sanctioned Iran. China also enjoys reasonable military and intelligence cooperation with Israel, another main regional adversary of Iran.

However, Beijing’s conclusion of the deal with Tehran, which has been in the making since 2016, is bound to deeply concern the Gulf Arab states, Israel and indeed the US. These countries are already troubled by a perceived Iranian threat, given Tehran’s expanding influence across the Levant (Iraq, Syria and Lebanon) and Yemen as well as its support for the Palestinian cause against Israeli occupation.

The US is also concerned by Iranian leverage in Afghanistan, where American and allied forces have been fighting the Taliban-led insurgency for two decades without much success, and from which Washington wants to extricate itself with some face-saving measures as soon as possible.

When combined with Iran’s close ties with Russia, the China–Iran deal potentially generates a strong axis that can only boost Tehran’s regional position and bargaining power in any negotiations with the Biden administration regarding the JCPOA. Biden has favoured a return of the US to the JCPOA, but on the condition that Iran restore some of the commitments it withdrew in retaliation for Trump’s withdrawal from the agreement. But Tehran has rejected this condition and demanded that the US first lift all of its sanctions.

Although the two sides have been posturing so far, it will come as no surprise if Tehran holds out until Washington blinks.

The Iranians have traditionally been wary of an alliance with any world power, although during the Shah’s rule their country drifted into the US’s orbit—something that substantially contributed to the consolidation of a situation that caused the revolution and demise of the Shah, bringing to power the anti-US Islamic regime. However, America’s constant hammering to pressure and isolate the Islamic regime, especially under Trump, has steadily driven Tehran to look to the East and to reach the point of concluding the agreement with China.

With Turkey also tilting away from the US towards China and Iran, despite Ankara’s and Tehran’s differences in Syria, the de facto alliances emerging in a strategically and economically vital region of the world poses a greater challenge to the Biden administration than may have been anticipated. If Biden had thought that his main foreign policy targets were going to be Russia and China, the Middle East may prove to be just as difficult to handle.

Amin Saikal is adjunct professor of social sciences at the Centre for Muslim States at the University of Western Australia and author of Iran rising: the survival and future of the Islamic Republic.