In October 6th, 2001, l wrote a column for the pioneering Brazilian website “NO: Notícia e opinião.”

It was shortly after the 9/11 terrorist attacks on the Twin Towers in New York City and on the Pentagon in Washington D.C. I was living in New York City at the time. President George W. Bush had by then already initiated the American intervention in Afghanistan where the Taliban ruled and had harbored the principal bases of Al-Qaida and Osama Bin-Laden, the Saudi Arabian mastermind of the 9/11 plot.

It recalled the disasters of earlier foreign interventions in Afghanistan, and in particular the First Afghan War between 1839 and 1842. The British general Sir John Keane had led a 20,000 strong Anglo-Indian “Army of the Indus” into Afghanistan with catastrophic consequences. Only one medical officer survived, his fellow soldiers all having been massacred along the 144 km retreat from Kabul. He reached the British forces besieged at the fortress of Jalalabad on the back of a bedraggled and forlorn donkey. The “NO: Notícias e opinião” website was lost.

But fortuitously l had re-published the column in my book “Mais Malandros” published in Brazil in 2002, so at least it survives in print. Jalalabad is an ancient fortified city in the northeast of Afghanistan which guards the road which links Kabul to the Indian subcontinent via the notorious Khyber Pass.

In 1954 while an army cadet as a schoolboy l learned to shoot at Jalalabad. My Jalalabad, however, was a red walled replica of the original fortress in Afghanistan. It stood near the center of the town of Taunton in Somerset, England, overlooking Vivery Park, and was then the headquarters of the Somerset Light Infantry. The unit of cadets to which l belonged at school was affiliated with the Somerset Light Infantry so we went there each week to use the rifle range for our target practice inside the Taunton’s Fort Jalalabad. 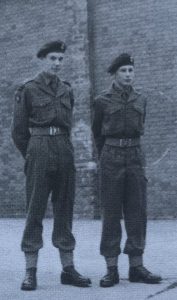 The British army is today entirely voluntary. Conscription was ended in 1959.

The Somerset Light Infantry was amalgamated into other units of the army in the late 1950s. The barracks at Jalalabad in Taunton was sold off and converted into apartments.

But l remembered that the ceremonial saches were awarded to the regiment for their service defending Jalalabad in Afghanistan over the long winter of 1842 before an “army of retribution” was dispatched from British India and besieged Kabul and destroyed the city’s ancient grand bazar.

35 years later the British repeated the error again in the Second Afghan War between 1878 and 1880. It was then that the Indian born General Frederick “Bobs” Roberts, later one of the great British Imperial Generals, sent his notorious telegram to the British viceroy of India requesting “reinforcements, tea, and sugar.” 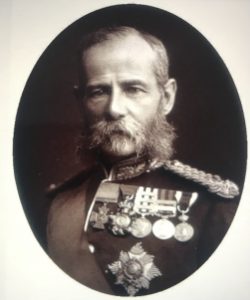 It was because of the British resistance in Jalalabad in 1842, defended by the men of the the predecessor of the Somerset light infantry, that the British retained some honour at all out of the first disastrous Afghan campaign. The young Queen Victoria determined that the Somerset Light Infantry should be known henceforth as “Prince Albert’s Own” in honor of her beloved German husband.

The regiment was also to adopt “Jalalabad” as their coat of arms, and the blue sashes used on ceremonial occasions were to be substituted by sashes of Royal Red.

These we wore in 1954. The imitation Jalalabad fortress in Taunton was also constructed as a worthy memorial.

It was in many ways the origin of the doctrine of “indirect governance,” or “indirect rule.” Afghanistan was the “locus classicus” of the “great game” when the great powers fought a “shadow war” for geopolitical advantages in ill comprehended, distant, inhospitable, and dangerous locations, with little success.

Intervention, betrayal, massacre, and vengeance, were the eternal realty among those desolate mountain passes over the centuries.

As they are today.

In the end this “shadow game” was never worth the effort.

Foreigners who invade Afghanistan will eventually unite the different tribes and ethnic groups against them, since they may hate each other, but in the end they hate the infidel even more.

Soviet Russia forgot this lesson in the 1980s.

Osma bin-Laden was hoping that the Americans would also forget this lesson in 2001.

Which President George W. Bush, and the Americans, and subsequently America’s NATO allies, also collectively forgot out of anger, hubris, or historical amnesia, or on the Europeans part to please the Americans.

Following America’s lead many of them, Britain under the prime minister Tony Blair (though not all, France, Belgium and Germany in particular) even went on to expand their military intervention into Iraq and with equally disastrous consequences.

Meanwhile the intervention in Afghanistan went on for another twenty bloody and fruitless years. Osma bin-Laden was eventually tracked down and killed in Pakistan during the Obama administration.

At its height this involved 130,000 troops from 50 NATO nations and partner counties from Albania, to Australia, to Denmark, but above all from the US, the UK, and Germany. In this period the Afghan National army was built up from virtually nothing to 352,000 soldiers.

This was the first deployment of NATO outside the Euro-Atlantic region and was the most ambitious and demanding task in NATO’s history.

The Americans spent well over US$ 778 billion between October 2001 and September 2019 in Afghanistan.

In addition, US$ 44 billion was spent by the US State Department and the agency for international development.  Some estimates put the figure at US$ 978 billion spent in Afghanistan and Pakistan.

Many contractors are also paid.

Britain is estimated to have spent more than £37 billion and has lost 444 soldiers killed, the largest number of deaths occurring in 2009 and 2010.

It has been the bloodiest deployment of the Bundeswehr in German post war history.

The final 1,300 German were withdrawn from Afghanistan in January.

In Britain and in Germany the soldiers who were deployed to Afghanistan almost all now think that it was a wasted effort and sacrifice.

If the Americans go all other NATO partners must go to.

President Joe Biden’s unilateral decision to withdraw U.S. forces from Afghanistan 20 years after the initial intervention on the ground of American armed forces there, and to preemptively end yet another of the America’s “endless wars” and without any consultation with the allies who had been dragged into these out-of-area NATO military operations, threatens another disastrous repetition in 2021 of the disaster of the early 1840s Jalalabad.

Those in Afghanistan who assisted America and its western allies will be massacred (as has already begun) by the Taliban insurgents who have seized much of the countryside and two regional capitals and are behaving with well-practiced and predictable brutality.

The consequences will be enormously damaging to the alliance and they are barely being recognized amid the global covid pandemic.

Though the tens of thousands of soldiers from all nationalities who have fought in Afghanistan over the last 20 years, and the relatives of those who have been injured, and most especially those who have died, will never forget or forgive the fate of their loved ones in these disastrously misconceived and mismanaged and preemptively begun and preemptively ended “wars of choice.”

On my visits to the Fort Jalalabad in Taunton as an army cadet l was responsible for checking out the rifles and ammunition from the Duty Sargent and returning the rifles at the end of the practice session. He was always very friendly as my uncle had for many years been the much beloved regimental Sargent-Major of the Somerset Light Infantry, the highest non-commissioned rank.

As l signed in the rifles after one session he placed his very large hand over the document.

Never he said sign a blank cheque: “Anyone can write in anything in the blank space and you alone would be responsible” he said.

Indeed, l had left a lot of blank space between the list of rifles and my signature.

It was a lesson l never forgot.  President George Bush signed a blank cheque in 2001, history has filled in the void, and President Biden in 2021 has dishonored  it.

And for the man who served as Vice-President to President Obama and who highlighted the importance of the “good war,” forgetting is not an option.