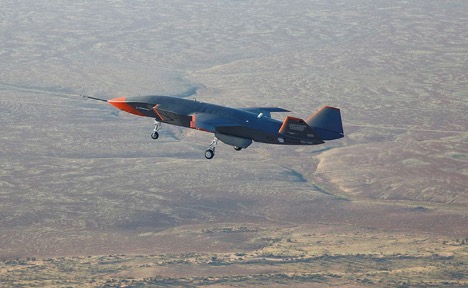 “The Loyal Wingman project is a pathfinder for the integration of autonomous systems and artificial intelligence to create smart human-machine teams. Through this project, we are learning how to integrate these new capabilities to complement and extend air combat and other missions.” Air Vice-Marshal Cath Roberts, AM, CSC, Head of Air Force Capability, Royal Australian Air Force (2021)

On 27 February 2021, the ‘Loyal Wingman’ completed its first test flight. The flight was conducted at the Woomera Range Complex in South Australia under the supervision of a Boeing test pilot monitoring the aircraft from its ground control station sited at the complex.

The Loyal Wingman’s first flight marks the first military aircraft to be designed, engineered and built in Australia in about 50 years.

It also signifies a potential disruption to the technology used in making decisions and designs for aircraft manufacturing and the delivery of military airpower.

The ‘Loyal Wingman’ (also called the ‘Airpower Teaming System’ by the manufacturer Boeing Australia) is an innovative new semi-autonomous remotely piloted aircraft. It is a prototype development being collaboratively designed and developed in Australia to better understand potential operational requirements for the future Air Force.

The air vehicle is a bespoke design measuring 11.7 metres with a 7.3 metre wingspan compared to an F-35A Lightning II that measures 15.7 metres long with a 10.7 metre wingspan. It is designed to be flown in different design configurations dependent on mission requirements. It has a removable nose section that can be optionally loaded with varying combinations of mission-specific payloads, including sensors. Configured with an off-the-shelf jet turbine, it can fly to a range exceeding 2,000 nautical miles (3,700 kilometres). It uses a conventional take-off and landing approach suitable for many missions and runway types. These different configuration options make the Loyal Wingman flexible in generating airpower effects.

50 years since the First Australian-designed and built Military Drone

The last military aircraft to have been designed, engineered and manufactured in Australia was the Jindivik more than fifty years ago. The Jindivik design represented a design solution to satisfy military requirements for an uncrewed aircraft that integrated a remotely piloted air vehicle with a telemetered or remotely operated mission payload. The crew could fly the air mission and be deliberately intercepted by a surface-to-air guided missile while remotely operating it at a safe distance from a geographically displaced ground station.

The development of Jindivik began in 1948. The British Ministry of Supply issued a specification for a high-speed pilotless target aircraft needed for use with anti-aircraft guided missiles being tested at Woomera under bilateral arrangements with Australia. The Australian Government Aircraft Factories (GAF) responded to the British requirement by developing the bespoke design as a remotely piloted, turbine-propelled, subsonic, high-altitude, telemetered, remotely piloted aircraft.

Jindivik remained in operational service as a remotely piloted target and target tow for military exercises and weapons tests. Australian Jindivik operations by the Air Force ceased in 1967, with Navy use ceasing much later in 1998. Jindivik represents an era of technology defined by analogue systems, manual designs, and labour-based manufacturing. Fifty years later, air vehicles and air missions exploit newer technologies to realise better benefits. However, to exploit and realise the maximum potential of these complicated technologies, teamwork between niche industries and technology bases is critical.

The Loyal Wingman has been realised from its digital twin. It was not built from a typical prototype aircraft—one which uses a team of engineers to assemble the prototype aircraft manually, performs system testing and evaluation, and uses the results to redesign and modify each prototype manually. This project exploits digital manufacturing technologies, model-based systems engineering, simulation modelling and testing, and manufacture and assembly by robots and other advanced techniques.

The prototype development required a team effort through the integration of humans and machines. Digital machines and machine intelligence have augmented the decision-making capacities and speeds of skilled human engineers. In addition to Boeing Australia and Air Force, 35 other companies are cooperating on the project. These companies including BAE Systems Australia, Flight Data Systems, AME Systems, Microelectronic Technologies, RUAG Australia, and Ferra Engineering. The cooperative manufacturing effort realised the first flying prototype after completing its design-to-flight phases in three years reflecting the evolution of teamwork in the design of this innovative design.

The Wingman Emerged from Early Experiences in Air Combat and Innovation

Throughout the history of air warfare, new aircraft systems have traditionally been evolved to augment and extend the sensor capabilities and reach of combat effects of the human crew. In the First World War, the machine gun was initially integrated into the airframe to increase the firepower mass and reach of the pilot flying a single-cockpit fighter pilot. Air aces such as the notorious ‘Red Baron’ were admired as standout individuals with advanced skills in flying and hunting, high combat scores, and impact on the battlespace. However, aircrew soon learned from their combat experiences the benefits of operating as teams, both as aircrew within the same aircraft cockpit and in separate aircraft.

Air combat tacticians used their experiences to influence the designs for a fighter aircraft operated by a pilot teamed up with an air gunner. The teaming of the pilot/gunner multiplied the sensory and firepower capabilities of a single aircraft, as typified in the Royal Aircraft Factory design for its B.E.2 multirole two-seater biplane. The immediate benefit was a second pair of eyes to provide the paired team with persistent 360-degree coverage of the battlespace, especially against rearward attacking fighters.

Air combat tactics were necessarily further developed by the Luftwaffe in the Spanish Civil War and widely adopted in the Second World War. Air Forces soon realised the value of teaming aircrew to fight in air combat with improvements in survivability and increased probability of mission success. Air tacticians quickly embraced the ‘wingman’ role, and fighter pilots were commonly launched into missions in formations based on their assignments as pairs and multiples of these pairs.

Each pair had a ‘lead pilot.’ The second pilot in each teamed pair was called the “Wingman”, whose primary role was to protect the lead pilot by “watching their back.”

The force multiplier effect of a teamed pair made air combatants more effective: amplifying situational awareness, enhancing defences and self-protection, and increasing the firepower available to better assure mission successes. The benefits of the teamed approach to air warfare became established as an enduring foundation of air combat tactics.

The Loyal Wingman is prototyping an innovative integration of autonomous systems and artificial intelligence into the control system for an air vehicle. Autonomous flight control systems have been in use since the application of the gyroscope and autopilots. However, the new and novel application of artificial intelligence (AI) embedded into aircraft breaks new ground for air combat.

The integration of AI pushes the efficacy of autonomous control further upstream into artificially controlling and quantifying the effectiveness of the air vehicle and its mission payload in the mission. A control loop can enable an AI system to compare the resultant effects against the mission requirements and analyse potential change options for improving the situation. The outputs of the feedback loop will be monitored by the AI and used to make calculated changes in the vehicle manoeuvring and trajectory autonomously. Additionally, optimisation algorithms can assist mission performance through self-generated improvements until mission criteria are satisfied, or intervention from a human-on-the-loop overrides control.

To increase the efficacy of aircrew who may operate in the future as an element integrated into a smart human-machine team, the aircraft will fly and cooperate with other crewed and uncrewed aircraft, using its artificial intelligence and carried payloads to complement the team’s performance. ‘Loyal Wingman’ will be a force multiplier in future air missions.

The Loyal Wingman enables airpower strategists and capability developers to better understand how autonomously functioning aircraft can be used as a force-multiplier for airpower. Soon, Autonomy and AI may help air strategists project air power beyond the capacities or operational risks that have limited transitional operating capabilities. Australia is also using the program to explore how autonomous uncrewed aircraft may support and augment the aircraft onboard capabilities for independent decision-making and smarter air combat.

The novel approach used in the design-to-realisation of the Loyal Wingman promotes innovation throughout the entire chain of activities needed to generate a new air capability – from the designer, developer, and manufacturer through to the user. Defence has traditionally sought to acquire mature military-off-the-shelf capabilities that are rigid in design and provide an assured margin advantage against the risks forecast in a future operating environment. Embracing innovation earlier in the design process enables Air Force to experience designing disruption into a system that can generate a capability with dynamic and flexible configurations. This in turn can make the final product more responsive to changes in future operating environments.

Squadron Leader Michael Spencer is currently serving in the Air Force Reserve. He transitioned after a career in the Permanent Air Force, starting as a Navigator flying in long-range maritime patrol missions on P-3C Orions. The experiences gained from operational flying were transposed into a career in future air concepts, air capability development, and project acquisition management for air and space capabilities. He is currently working with the AFHQ RPAS Team and the Defence COVID19 Taskforce.

The featured photo is credited to the Australian Department of Defence.

This article was published by Central Blue on November 6, 2021.