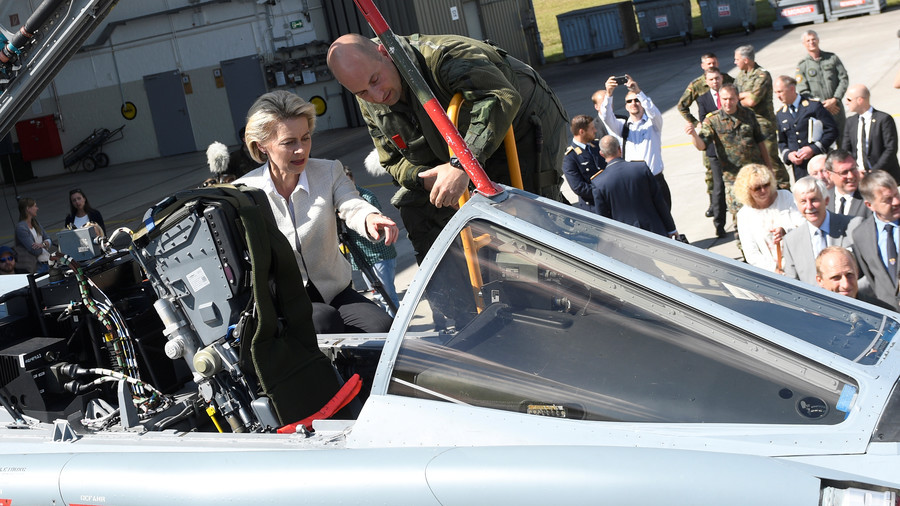 I had a chance to discuss many airpower issues while in Germany last week.

Obviously, issues like Eurofighter modernization, the impact of the European fleet of US and European F-35s, the Tornado replacement and the fate and trajectory of the Future Combat System were discussed during that visit.

Over the next few weeks, I will write to those discussions and the issues raised.

Clearly, a key one is the Tornado replacement issue.

As the RAF will no longer operate the aircraft, Germany is increasingly alone in dealing with operations of the aircraft and any updates necessary to contribute to the direct defense of Europe.

The cost to do so is going up.

As a Defense News story published April 13, 2018 put the challenge:

The planned phasing out of the United Kingdom’s last Tornado aircraft has German officials scrambling to deal with the increasing costs of a shrinking fleet.

Continuing aircraft reductions in the tri-national program, which also includes Italy, have led to “significant technical, logistical and financial risk” in maintaining the 1980s-era fighter-bombers, officials have told lawmakers in a confidential report seen by Defense News.

While the prospect of Britain’s exit from the aircraft program has been known since November 2016, there is “no sufficient and comprehensive planning in place” for sustaining the remaining German planes, the report warns.

And because the Tornado provides the nuclear component for the Luftwaffe, any question of the replacement of the aircraft raises the broader question of whether or no Germany remains in the nuclear deterrent business or not.

Currently, SPD machinations clearly are designed to put German out of the nuclear deterrence efforts to deal with Putin’s Russia.

But this is a work in progress which also makes considerations of the Tornado replacement a more open question than certain press reports have suggested, largely around whether or not Germany will joint the F-35 global enterprise.

The RAF has already shaped its Tornado replacement and it is not a single aircraft but an F-35 led integrated air system or air combat approach.

I have interviewed many RAF officers over the years and have provided a series of interviews that make it very clear the trajectory of the RAF on airpower modernization and the way ahead which the MoD wishes to take leveraging the new air systems combinations.

The first key element is clearly the F-35.

You need only see where the last Tornado landed to get the point.  The Tornado landed at RAF Marham, where the UK’s F-35 s are based and will expand over time, to support both the Navy and the RAF.

As Group Captain Ian Townsend, the RAF Marham base commander, where the first F-35s have been IOCd for the RAF, noted in my interview with him:

The second key element is to migrate the Tornado EW role over a system-of-systems approach, which will rely on the F-35, the P-8s, perhaps the Wedgetail as the core combat assets in an integrated approach.

In an interview which I did in 2016 with Wing Commander for the Tornado Operatinal Conversion Unit at Lossiemouth, Paul Froome, we focused on this key aspect of Tornado transition.

One challenge is that the Tornado crews have combined a wide range of operational experience, ground attack, day-night operations, electronic warfare, and reconnaissance and the question is where those skill sets will migrate within the RAF.

With regard to EW, Wing Commander Froome argued that there has been an atrophy of the Wild Weasel like skill sets in favor of what became a more pressing need, namely to combat manpads.

“Earlier, we had two squadrons of Tornados that were effectively Wild Weasel squadrons with our ALARM or air-launched anti-radiation missile, similar to HARM. As we fought in Iraq and Afghanistan, some skill sets began to fade, and this was one of them. The threats there were MANPADS, so our EW system developed a very capable counter-MANPAD capabilities.”

What will happen to the Electronic Warfare competence as the Tornados are retired?

“Good question. They can provide support for a number of the new platforms like F-35 and P-8. The RAF tends to be good at carrying forward core capabilities and sorting out how best to evolve them with new platforms coming in. I think we’re very good, historically, on recognizing people with those competencies, and their skill-set, and using them in the best place.”

He did issue a caution with regard to the coming of the P-8 and the need to evolve the skill sets.

“The P-8 is clearly not Nimrod. If we think that we’re going to take an old-fashioned air electronics operator, and use him in the same way on the P8, we’re missing a trick.

We need to be developing the crews now to be maritime warfare operators, not electronic operators, and radar, and wet and dry, we need to be thinking bigger than that. If we don’t, then you end up making problems for your F-35, your Typhoon, your P8, your Reaper, your Son of Reaper.”

In short, sun setting one platform requires a shift to shape an effective sunrise of the next. It is about the challenge of managing an innovative transition.

The third aspect is modernization of Typhoon.

The RAF does not fly a standard Eurofighter; they have evolved the Typhoon outside of the Eurofighter coalition and shaped capabilities to compliment the F-35 and to subsume some of the weapons capability of the Tornado.

For the UK, Project Centurion is the core modernization effort with regard to Typhoon, the main focus of which is upon transferring some of the weapons carried by the Tornado onto the Typhoon, to enable that aircraft to take over some of Tornado’s capabilities, but clearly not all.

It is clear that the RAF had to go outside of the very slow modernization process generated by the Eurofighter collaboration approach.  And they did so, with a clear eye to subsuming some of the Tornado missions but also with regard to the coming of the F-35 and the expectation that synergy between the two would define the way ahead for the RAF.

My interview in 2016 with Wing Commander Peters, Officer Commanding Engineering and Logistics Wing at RAF Lossiemouth, highlighted the path which the RAF took to get the modernization of the Typhoon they wanted.

The RAF has paid for the upgrades on Eurofighter to get it to the point where it can subsume some of the Tornado missions and if another Eurofighter partner wishes to acquire UK intellectual property, the UK MoD is probably willing to do so for a price.

Wing Commander Peters highlighted that during his time at Abbey Wood, the structure was put in place to make the requisite changes.

Here the Requirements Management staff and the engineering specialists of the RAF and MoD Civil Service operated in close proximity to identify necessary changes and to find ways to get those changes implemented.

“The requirements manager would walk 100 yards across the hall and say: “The Air Command customer wants me to achieve this effect.

“Engineers, what can you do to deliver it?

“During my time at Abbey Wood, we were driving the P1EB modifications on the aircraft for UK needs for the RAF.

And it was clear from talking to an RAF weapons officer that only some of the Tornado weapons could be migrated to the Typhoon, and that those weapons would not operate exactly in the same manner, given the very different nature of the operating enveloped and flight characteristics of the two aircraft.


In other words, the Tornado replacement for the RAF is driven first by the F-35, secondly, by a modified Typhoon, which will subsume some of the weapons roles of the Tornado, and by an expanded EW capability delivered by several new aircraft working together in the fleet.

And the Ministry of Defence’s approach to its “next generation air combat system” or Tempest is just that: it is not an aircraft per se but leveraging the learning they will engage in the next decade leveraging the “Tornado” replacement so to speak.

For a look at Tempest, see the following report:

Europe and a Future Combat Air System: Is it Already Here?

And a key part of that will be the cross-learning delivered by the F-35 global enterprise and a challenge will be to work with those who are not as well.

A projection of what this looks like in terms of the impact of the F-35 global enterprise on European airpower can be conceptualized something like this: 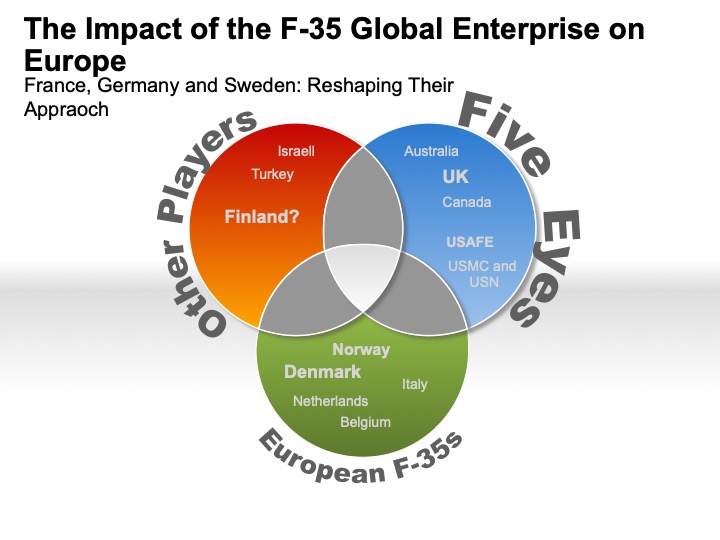 In short for Germany, the Tornado replacement issue entails a number of questions and challenges.

First, will Germany remain part of nuclear deterrence by participation in that mission?

Second will the Luftwaffe will work with the RAF and how the most advanced Typhoon capabilities can be incorporated in the “Tranche IV” Eurofighter?

Third how will the Luftwaffe replace the integrated ground attack capabilities of Tornado not done by Eurofighter?

A key aspect of this which will be covered in later articles is the importance of ensuring in some way that its combat aircraft can integrate with active defense capabilities both for the direct defense of Germany and its ability to project power in the proximate neighborhood.

Fourth how will the Luftwaffe ensure that it can operate with F-35s?

Fifth, how will the Luftwaffe ensure that the very long range commitment to FCAS simply neglects the ability for the Luftwaffe to be at the heart of near and mid term rebuild of the Luftwaffe and German commitments to the defense of the new NATO members to its East?

Obviously, this a major challenge and a work in progress.