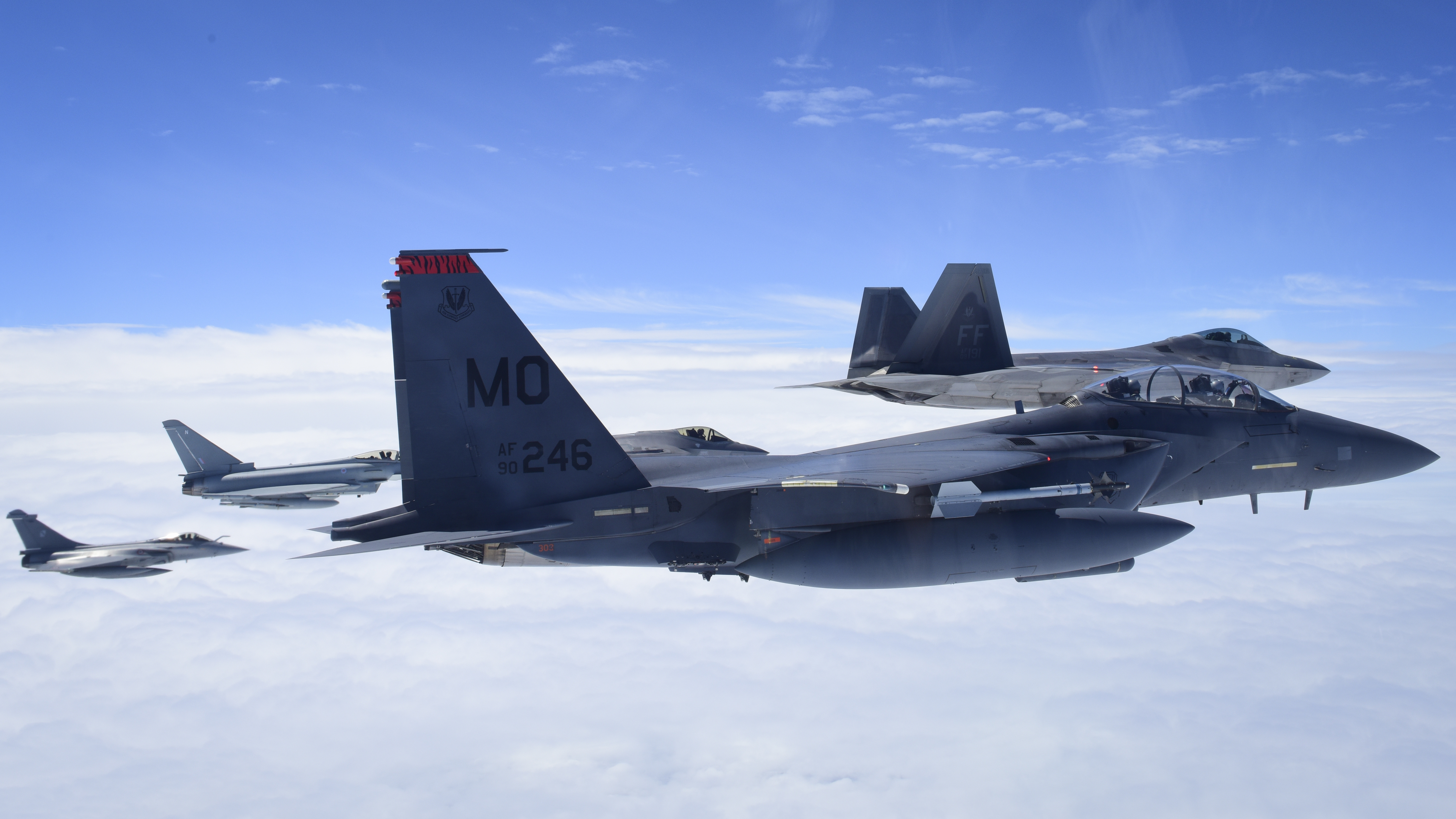 There is very little question that the impact of the F-35 global enterprise is a significant one.

Those Air Forces flying F-35 have grasped the fundamental point that its impact is strategic in character, and are changing how they redraft their air combat forces, notably with the objective of shaping new multi-domain integrated force capabilities.

It is also not the end of history with regard to air combat development.

And one impact of the F-35 is the telescoping of generations of combat aircraft to sort through what a blended but integrated fleet will look like in the mid-term, and how that force blend will set in motion the “next generation” airpower capability.

In other words, rather than speaking of sixth generation fighter aircraft, it is more accurate to talk about next generation air combat capability which will be driven by the dynamics of change generated by the impact of fifth generation aircraft on the legacy fleet.

At the International Fighter Conference 2019, such a perspective was clearly highlighted by the presentations by senior RAF officers.

When I was in the United Kingdom this past May, I had several meetings with senior RAF officers who precisely focused on this transition which in many ways is how they interpreted Project Tempest.

While much focus has been upon the ultimate fighter which might come out of the Project Tempest effort, it is clear that for the senior RAF officers I interviewed, they had in mind the telescoping of generations, and working through the blend to reshape almost cultural revolution like the evolution of combat airpower and at some point consider what a new fighter platform might look like.

In other words, a reversal is underway.

In my summary of the findings from the May visit regarding Team Tempest, I reached the following set of conclusions:

The problem posed by having at the vortex of this launch a new combat aircraft is that really the main thrust of the way ahead for the decade ahead is not really about that – it is about evolving new capabilities which flow from the Typhoon-F-35 integration effort and from the work with global F-35 partners on weapons and remotes.

At some point, I am sure a new combat platform will emerge from this, but the focus here is clearly quite different from the Franco-German announcement which focused clearly on the need to launch a new fighter and to use that launch point as the iron magnet to draw together the strands of airpower modernization.

In meetings last Fall and this Spring in London, it became apparent that the British approach to FCAS is very clear – leverage the Eurofighter/F-35 dyad to figure out what to do next in the air combat development area. it is clearly about leveraging the dyad of Typhoon and F-35 to shape a decade or two of innovation and to leverage that UK, allied and partner development process to deliver what is to come next.

It was pointed out in private meetings that the UK was following what they saw as the USAF lead whereby the USAF was not committing itself to a sixth gen aircraft but to leveraging fifth gen with unmanned with the legacy fleet and weapons modernization to sort out what comes next.

The Brits with whom I met underscored that Team Tempest was not necessarily targeting a new build combat air frame, but really trying to leverage the innovations of the next decade to position UK industry to build, shape and craft the capabilities needed in the 2030s and 2040s.

Rather than having a clear commitment to a future combat fighter, it was a commitment to building out air combat capabilities to the point where new platform decisions could be taken.

But these decisions would be taken as the only Tier One partner in the F-35 with a 15% stake in the global program. This is a very different approach being proposed by France and Germany and allows Britain as well to work with the very significant F-35 global community, which might well join in a broader leveraging strategy with the RAF.

In my view, the core thrust of UK efforts to shape a way ahead are a function of six interactive efforts or dynamics which can be seen in the graphic below. 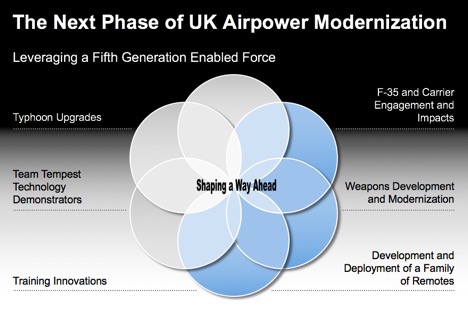 At the IFC 19, one senior RAF officer underscored that the F-35/Typhoon integration was being undertaken while “in direct contact with the adversary.”

Put bluntly, it was not about shaping a set of briefing charts about the next generation aircraft, but shaping a blended capability driven by the introduction of the F-35.

And this was being done by working with other key F-35 partners.

For example, this officer noted that the UK’s F-35Bs had operated off of Cyprus while working directly with USAF F-35As operating in the Eastern Mediterranean.

This type of exchange is facilitated by the missing capability of the F-35 not discussed at the IFC 2019, namely the CNI.

There was much discussion about the coming combat cloud, but a key enabler of a machine-to-machine capability along these lines already exists thanks to the sensor fusion inside each F-35 and the ability to work with clusters of F-35s through the multi-layer security integrated CNI system.

What exists TODAY is the foundation for generating enhanced integrated distributed combat power in the near to mid to longer term futures.

It is not about going backwards to building from federated systems to work through networks; it is not about building out sequential airpower operating through hand-off networks.

It is about packages of forces working together to integrate with their ability to operate a forward moving combat cloud.

The core point again is integration.

For integration has generated both the requirement and capability to provide for an integrated security solution for data generation and communication processes.

And as we anticipate manned-unmanned teaming it is clear that such integration is a foundational element for moving forward.

What the MADL data link connecting the projected four ship formation of F-35s allows for four computers working across that “combat cloud” associated with the four-ship formation to fuse data using FOUR computers rather than just what an aircraft can do with its organic onboard systems alone.

At the IFC 19, Air Commodore Dan Storr, Head of Combat Air Acquisition Programme, provided an overview of the current UK combat air strategy and the approach of MoD to delivering the next generation air force.

He underscored the importance of shaping core partnerships in the effort to shape next gen capabilities, and clearly the UK has done this by being a Tier One partner in F-35, building, maintaining and flying the most advanced Eurofighter operator in the world, and by launching an innovative rethink which is being worked by Team Tempest.

And recently, Sweden has joined Team Tempest which means that the UK has a capability to combine the synergy of the Swedish cost-effective design and build excellence, with the formidable cross-evolution of the F-35 with Typhoon.

According to Air Commodore Storr: “We are looking ultimately for the right balance between the F-35 and something else.

“And we are looking for partnerships across the spectrum of efforts, including unmanned systems and subsystems as well.”

Air Commodore Storr made the very reasonable projection that what he called “additive capabilities” would come clearly in advance of any new fighter.

In a slide from his briefing where he discussed the question of platforms and additive capabilities, it is clear that the conjunction of weapons development and loyal wingman develops are crucial in the mid-term horizon. One aspect is clearly highlighted by the work in the complex weapons program, where SPEAR 3 is maturing as a new capability which can provide more data connectivity plus autonomy, in many ways in migration to the new generation of remote carriers envisaged in the UK, European, Australian and U.S. approaches.

In addition, the UK has launched the LANCIA project earlier this year, which is the functional equivalent of the Australian Loyal Wingman program.

According to the MoD project release:

The Ministry of Defence (MoD) is undertaking pre-sourcing activity for a potential future requirement for the preliminary system design and assessment of cost-capability trade-offs for a low-cost Unmanned Combat Air System (UCAS) demonstrator.

This UCAS would see a significant reduction in its cost and development time compared to traditional combat air systems, and a potential future requirement would include the development and manufacture of the proposed design, and the conduct of a limited flight test programme.

This is something which I have discussed at length in both Australia and the UK where there are quite convergent perspectives on the way ahead.

And I highlighted those convergencies in a report published earlier this year:

Australia, the UK and Shaping a Way Ahead for Military Transformation

The F-35 Lightning II was incorporated in the exercise, along with the F-22 Raptor and fourth-generation assets to develop tactics, techniques and procedures that can be used during future coalition fights. (U.S. Air Force photo/Staff Sgt. Natasha Stannard)