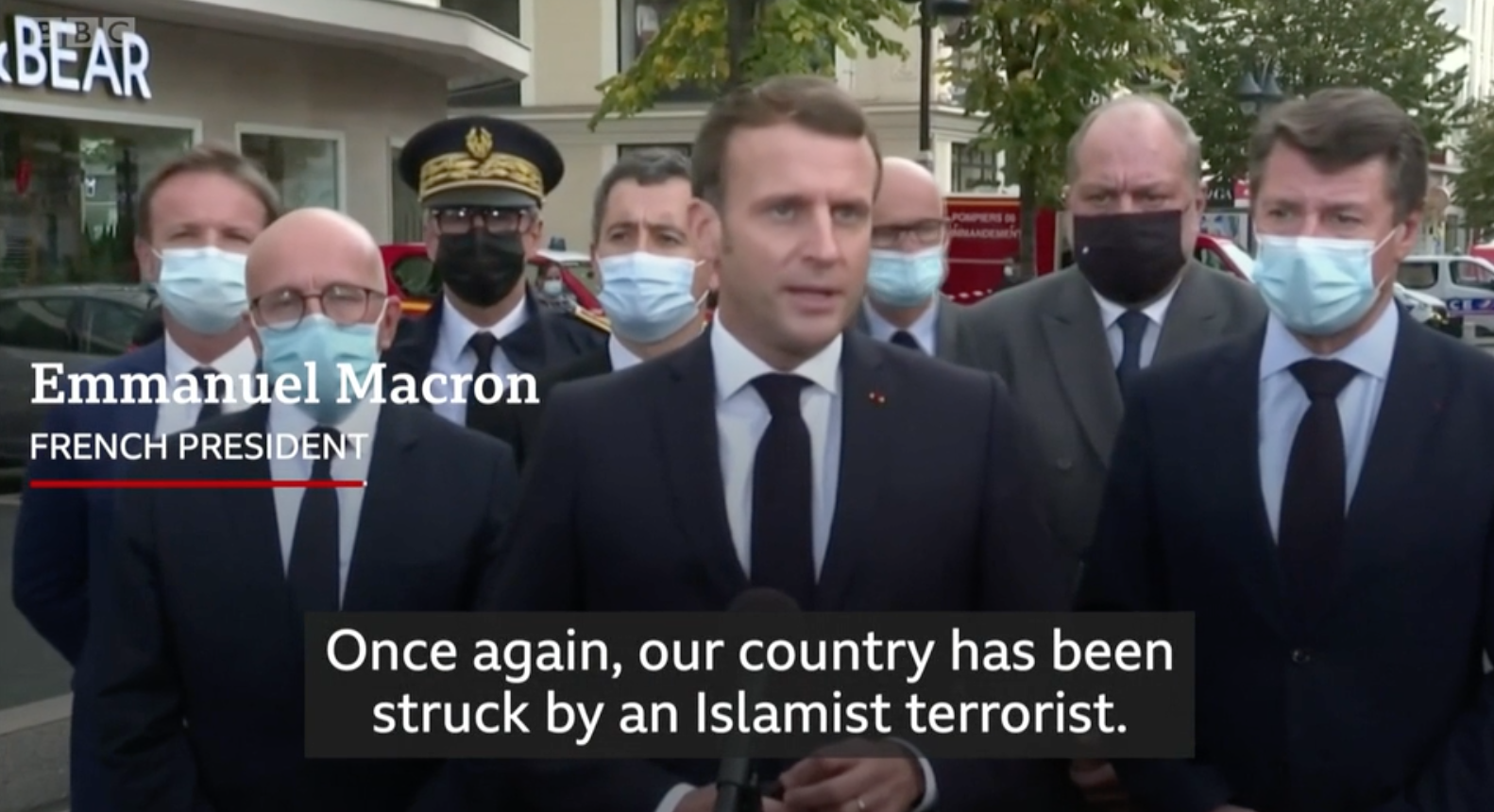 In September and October, France suffered three terror attacks that left two wounded and four dead. The French government said the attacks were motivated by radical Islam. (Since 2001, France has suffered 270 deaths due to Islamist violence.)

After the last attack, in Nice, French president Emmanuel Macron declared, “France is under attack” and that France would “not give in to terrorism.” Macron announced the state would take strong action against Islamist influence, most notably calling on French imams to agree to a “charter of republican values” that states “in black and white” that Islam is a religion and not a political movement, and prohibits “foreign interference” in Muslim groups.

Macron doubled the number of security personnel deployed along France’s borders and announced a bill that would restrict home-schooling and enable harsh penalties for those who intimidate officials on religious grounds. He also called for greater counter-terror cooperation among European Union (EU) governments, an intensified fight against terrorist propaganda, and a rethink of the open-border Schengen arrangements.

Though Macron says radical Islamism is “a political ideology which distorts the Muslim religion by twisting its scriptures” Muslim leaders from other countries piled on. His most notable critics were former playboy and current Pakistan prime minister, Imran Khan, and Turkey’s president, Recep Tayyip Erdoğan.

Erdoğan helpfully suggested Macron needed “mental checks” which is pretty rich as the country Erdoğan is privileged to lead was organized by Mustafa Kemal Atatürk with France’s laïcité (secularism) as a model. The United Arab Emirates, though, supported Macron and the Minister of State for Foreign Affairs said, “You must listen to what Macron actually said in his speech. He does not want to isolate Muslims in the West, and he is absolutely right.”

Other say France doesn’t understand the nature of radicalization or that Macron’s goal is really heading off Marine Le Pen, his likely rival in the 2022 election. Troubling, though, is the silence from other European capitals, though Macron did get a tweet of support from Mark Rutte, the Dutch Prime Minister. From London and Berlin…crickets.

The U.S. and France have different views of religion in the public square, and mock each other as a national pastime, but Paris has concerns that converge with Washington’s.

The U.S. has an interest in France’s success in the fight against Islamists. The two countries have a robust intelligence sharing relationship, and the U.S. needn’t meddle in France’s internal affairs, but Washington can recommit to helping its oldest ally – and contribute to the West’s security – by aligning some regional military moves with Paris.

France pulls its weight in security matters. It maintains an active nuclear deterrence force, recently announced it would buy a new nuclear-powered aircraft carrier , deployed its navy to the eastern Mediterranean Sea in response to Turkey’s incursions into Greek and Cypriot waters, and is the key partner of U.S. counter-terrorism operations in West Africa (where the U.S. provides airlift, aerial refueling, and intelligence sharing).

France maintains a military presence in Francophone Africa to ensure stability in former colonies and facilitate Macron’s conception of Europe and Africa as one region, and which calls for a “Europe that is much more geopolitically united and involves Africa as a partner, on an entirely equal footing.”

Much of the filigree of Macron’s Africa policy isn’t a concern of the U.S., but the counterterror mission is where continued American involvement will pay off for both parties (and Africa!)

Where is the mission?

It is largely in the Sahel, the transition zone between the Saharan desert to the North and, to the South, the tropical savannah that runs East to West and, according to Peter Zeihan, “It is here, in the Sahel, that the Americans will fight their final battles in the War on Terror.”

In Africa, the U.S. operates from 27 bases of varying permanence, most in the Sahel. France is also there, with most of its forces to the North of the U.S. belt of bases. It also operates naval patrols in the Gulf of Guinea and has a large presence in Djibouti on the Horn of Africa.

France has committed about 5,000 troops to its effort, Operation Barkhane, which commenced in 2014 and is headquartered in N’Djamena, the capital of Chad. (The United Kingdom and Estonia have also made small troop contributions.) The U.S. has from 5,000 to 6,000 troops in Africa on any given day, a number which likely doesn’t include classified missions or CIA paramilitaries.

French forces, which operate with the G5 Sahel Joint Force – troops from Burkina Faso, Chad, Mali, Mauritania, and Niger – are mostly conducting counterterrorism (CT) operations. The U.S. effort is more board-gauge with much of its effort focused not only on the camera-ready CT mission but on helping African forces build skills in logistics, communications, and intelligence analysis. The most important aspect of the U.S. mission is “security sector assistance” which promotes a sense of military professionalism that respects the rule of law and civilian control of the military and recognizes that terrorism can’t be quelled by stick alone.

In Africa, France, the “reluctant gendarme,” has a rep for operating unilaterally and the local governments are unsure of the level of U.S. commitment. In 2019, the Pentagon said it would reduce troop levels in Africa and in December the Pentagon announced a redeployment 700 troops from Somalia to outside of east Africa (but still on the continent). Last, the U.S. is reducing number of defense attachés in West Africa which will reduce day-to-day access to host nation decision makers.

It is pretty plain the locals want to see a greater U.S. focus on the region. West African leaders warned against a 2019 troop cut and, in the words of Senegal’s president Macky Sall, “It would be a mistake, and it would be very misunderstood by Africans.”

Washington has made a start: the U.S. Army reorganized its forces for Europe and Africa under one commander; and the Congress boosted the budget of the U.S. Africa Command. Now the Biden administration should follow up and make a firm, and public, commitment to the Africa mission, work more closely with France, and ensure the U.S. and France aren’t working at cross-purposes with the UN peacekeeping missions on the continent.

And the sooner they get started the better, as militant Islamist activity in Africa has doubled from 2013 to 2019, and the greatest increase in violent extremist activity in 2019 was in the Sahel.

A U.S. commitment won’t fix France’s domestic terrorism problem, which is partly due to a failure to integrate Muslim immigrants into French society, though others have said France’s laïcité is an 18th century article of faith that “cannot remain the sole guide to human co-existence.” (Those same guys probably aren’t interested in likewise critiquing some well-known 7th century articles of faith but let’s leave that to the French to work through.)

That said, Macron’s sit-down with the French imams gave them political standing they hadn’t earned they aren’t representative of the larger French Muslim community and disaffected young Muslims the government needs to reach aren’t hanging around their mosques.

U.S. support of the Africa mission may bolster France in intra-EU matters, but who would you rather have leading Europe? Germany? If you’re Russian leader Vladimir Putin you do, as he can always count on Germany’s influential Putinversteher, Putin explainers, to lobby for the Kremlin. Exhibit A if you want to see real “Russia collusion” is Gerhard Schroeder, the former German chancellor and now head of the supervisory board of the Russian-controlled NordStream 2 gas pipeline consortium.

These guys are heirs to a 19th century tradition that has a fascination with “uncivilized” Russia and “saw in both the Russians and Germans at the beginning of the 20th century a healthy contrast to the rationalist, materialist-oriented West.” This is the mythologizing and wooly philosophizing that got Germany (and Europe) in so much trouble once before – and is why we now have NATO and the EU.

Germany is a useful provider of hotel services to support U.S. operations in Europe, Africa, Central Asia, and the Middle East, but it’s not a full partner in the sense that it can “fight tonight.” Germany’s continuing hangover from World War II, the influence of the Russia lobby, and its abysmal military readiness rate – with no reversal in sight – limits its usefulness to the U.S. as a partner for military missions anywhere and security sector assistance in Africa.

The incoming Biden administration probably has big plans for reinvigorating America’s interventionist streak in places like Syria, but a commitment to the low-cost, high-payoff Africa mission – in coordination with France – will help stanch Islamist terror in Africa, back up America’s oldest ally, and contribute to building strong government institutions in countries that welcome America’s assistance.

U.S. Support for the Barkhane Operation: A Case Study in Effective U.S.-Allied Cooperation